TAR is back! At least one gig confirmed.

For at least one gig, that is - the PRF BBQ 2012 open-to-the-public event in Chicago with about a bajillion bands playing, all friends of Electrical Audio to a degree (Steve Albini's studio) and members of the PRF.

The details were slowly developing on the band's Facebook page (sudden meetups for practices, etc) and now it's official.

Oh to be in Chicago for this...!  I've seen Tar at least twice and twice wasn't nearly enough.  Fantastic live band and they're back!

Tangentially related to this month's theme - Tar's first full-length LP was recorded by none other than Iain Burgess.
Analog Loyalist at 8:17 PM 3 comments:
Share

In auditioning material to clean up for my Iain Burgess series, I've had the opportunity to inspect a lot of assorted vinyl transfers from vintage mid-80s punk vinyl.

Man, Homestead used some really cheap vinyl and from my investigation had a lot of really poor pressings.

Breaking Circus is a perfect case.  In auditioning the EP The Very Long Fuse, I've heard three different FLAC transfers, from presumably three separate copies of the record, on three different setups (turntables, cartridges, etc) - and they all suck.  Not the fault of the rippers, I think, it's just that all the copies used are presumably beat to hell, and are poor pressings to begin with.  Same goes for the Smokers' Paradise EP.  Oddly, the one Breaking Circus that's giving me the least issues is the only full-length album The Ice Machine - which is odd in that it has the least bit of inner groove distortion on the side-ending tracks, yet the sides themselves are longer than either EP sides.  I know that one of the rippers provided his rips of Fuse and one of his rips of Ice Machine, and his Fuse is craptastic while his Ice Machine is really nice - which rules out his setup being the problem.

So again I place the call:  Does anyone have *nice* transfers, in FLAC, of either Breaking Circus EP?  Someone somewhere has to read this blog, have a near-mint copy of the record(s), and has the ability and capacity to transfer them to FLAC on nice equipment.  If I had the records I would, but my setup is less than ideal for good-quality playings off vinyl.

This is why if I had a million dollars I would somehow gather up the rights for all the non-rereleased Homestead releases, start up a reissue label, and get these classic records back in print and up to speed in the digital era.  There's no reason why half the Homestead catalog - if not more - languishes in out-of-print obscurity, and more often than not never made available on CD from the start.  I'd also pay royalties, both earned from my stewardship, and unpaid from Homestead's tenure. 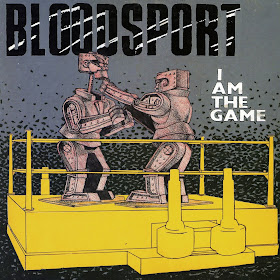 In 1985 the Chicago punk scene was fairly disjointed, having split into factions with only Naked Raygun uniting the scene.  The Effigies had devolved into sub-pop (not Sub Pop), and among the early scene players only Raygun was moving forward with any momentum (or even still really a band).

Some members kept the torch alive, though, and joined up to form the largely underrated Bloodsport.  As the two main bits online about this band both mention, the band was really more famous for who the musicians played in prior to, and then after, Bloodsport (Effigies, Pegboy, Trial by Fire, Strike Under...).  The history - while important - is not really relevant to the fact that their one and only record, the 7-song I Am The Game released on Homestead in 1985, is spectacular.  It's as forward-looking as any Chicago punk record ever was, and it's a shame the band didn't carry on because it's blatantly obvious that there would have been even greater things to come based on these 7 tracks alone.  The last track even features acoustic guitar!

So enjoy this FLAC set, from a (surprisingly) not-poor transfer from original Homestead vinyl.

BLOODSPORT
I Am The Game
Recorded by Iain Burgess at CRC, Chicago
1985 Homestead Records

It was two years ago last month that one of your humble blogger's greatest musical heroes - in a technical sense, not specifically songwriting or performance sense - passed away. 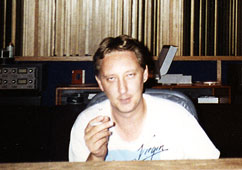 To celebrate this man's contribution to our collective musical heritage, this month I will only be posting records engineered by Iain.  By nature of the man's location during his heyday (Chicago, 1980s), this series will necessarily focus on the Midwest punk axis, and by this I mean Chicago and Minneapolis.  I, as has been the case lately, will focus on otherwise out-of-print records, because any band that manages to keep its Iain-produced records in print today needs massive piles of cash flung its way.

*I* know what records I have in my pipeline for this series; if you have suggestions please leave a comment!  It's entirely possible your suggestion will trump something on my list.
Analog Loyalist at 12:33 AM 1 comment:
Share
‹
›
Home
View web version