Now that I'm home and at my PC I can elaborate on my last posting.

About 10 years ago it was rumored that Kevin Shields was working on remasters/reissues of the legendary My Bloody Valentine Creation-issued EPs and LPs ("You Made Me Realise" / "Feed Me With Your Kiss" / Glider EP / Tremolo EP / Isn't Anything / Loveless).  Hopes would rise and fall, announcements made with release details, then suddenly yanked, etc.

This is funny - and it's only the past couple years!

In 2008 review copies were sent out, and some made it "into the wild" so to speak.  These leaked copies were long questioned as to their veracity, until Kevin helpfully cleared it up in a wide-ranging interview with Pitchfork a week ago.  They were indeed legit.  Which was good, because it gave us a nice baseline (along with the original 1991 Creation CD which I have) to use in comparing today's release (finally!) on Sony.

The Loveless reissue consists of two CDs, the inlay details it quite nicely:

"Original tape" is the '91 DAT master.  "Original 1/2 inch analogue tapes" is exactly what it says.  The '91 release - and all pressings since, until now - were sourced from the digital "original tape" master.

Kevin helpfully detailed what he did in the remastering in the interview with Pitchfork:


So, of the two Loveless CDs that are coming out, one of them is exactly the same as the original, but everything's brought up to zero without crushing it with digital limiting, which essentially takes all the information and chops off the spiky bits-- transients-- that you don't hear as much as you perceive subconsciously. Those are the things that make you feel connected to the music. So something can be 10 dBs louder, but it somehow sounds slightly less involving. Each of those chopped-off peaks puts a little piece of distortion there instead, so the overall sound gets this hard, unpleasant kind of sheen, and you can't hear it as well. There is a tiny bit of digital limiting on one song on the Loveless reissue, but I'm not gonna say which one because it was a sacrificial lamb to get the rest of the album up a bit. And since the sound is brought back to zero, it means your CD player will be able to process it a bit better, so that it kind of sounds... "better" isn't the right word, it just feels different.


The original Loveless was from a digital master because it was much closer to the picture I wanted, and, at the time, the analog one was slightly twisted-- the process of putting it onto tape widened the stereo image and made the top and bottom ends too loud, so the guitar placement wasn't correct. I wasn't happy with that and I didn't use the original half-inch analog tapes. But, this time around, I had the time to take the original analog tapes and fix all the things I didn't like, so all I left was essentially the benefits of the analog with none of the disadvantages.

When people hear the two new remasters, some can't hear the difference. But, for anyone who's slightly into it, I can promise that if you listen to the record from beginning to end, you're gonna have a completely different feeling with one version compared to the other. They're both good for different reasons; the digital one is slightly more like an inner head trip and the analog one is more physical, like you're conscious that some people did this.

All of which greatly helps us sort out which CD in the package is which, because, the package has been horribly mispressed.

There are a lot of little details to the '91 master that carry over exactly to the digital (original) remaster - a bit of hiss before "Only Shallow" kicks in, an abrupt ending to the long "Soon" fadeout, and especially this:  there is no EQ difference *at all* between the '91 Creation CD, and the "original tape" remaster.  Except for a volume boost (as Kevin himself says), the versions are essentially identical.

The interesting - and to my ears, special - differences are with the 1/2 inch analogue tape version.  There are a lot of differences here: the stereo field is wider; the digital "shrillness" is tamed, there's a bit more presence at the bottom end, and the EQ is noticeably different.  The image below shows what one has to do to the "original tape" (meaning the '91 release, and the "original tape" remaster) to match the EQ to the new version of "Only Shallow": 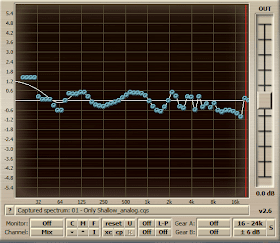 There is a distinct difference in feel, presence and just general "analog-ness" for want of a better term.  It's just plain nicer to listen to, and much more revealing to me.  Granted, this isn't a *huge* difference in EQ, but it is enough.

The 2012 release has the CDs backwards, though the cover art still indicates above.

Another critical error is in the "1/2 inch analogue tape" remaster:  there is an ugly digital transfer glitch approximately 2:46 into "What You Want", during the "I do, I do..." bit.  It's prominent and ugly, audible (yuck! through headphones) and visible in a spectral view.  This error was also present in the 2008 leak of the analogue tape variant, so Kevin/Sony has had (at least) 4 years to fix this.

These are critical errors.  The packaging/labeling error will confuse any and all buyers, and reviewers won't be reviewing the proper discs.  The glitching in "What You Want" needs to be corrected immediately.  It mars an otherwise fantastic release; in my opinion the analogue tape mastering is the definitive mastering of this essential LP.

Kevin and Sony, if you are reading this, do the right thing and recall/correct the problem.  You owe it to the fans who shelled out their hard-earned dosh for this, and if after all these years it can't be issued properly, there's no excuse for the error.
Analog Loyalist at 11:15 PM
Share