Is this 1992 LP by that other Liverpool band The Boo Radleys the best post-Loveless (My Bloody Valentine) shoegaze LP there is?

I am not feeling too chatty tonight. That, or I'm simply not as deeply familiar with the band at hand tonight, or full of a wealth of useless nuggets as I am for other bands. But who says every post has to be my blathering? 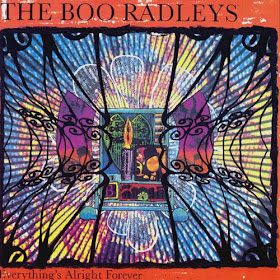 Everything's Alright Forever is just a great, GREAT out of print record by a band that quickly escaped this classic sound just as the backlash started. When the UK press beat down the 'gazers, the Boos put out Giant Steps - a record that sounds like Britpop played by shoegazers, with a bit of the classic Rough Trade dubby catalog mixed in.

Giant Steps receives all the critical accolades, but this record is better. And the dynamics are utterly amazing - you can HEAR the volume swells.

Incidentally, I have an unused ticket (number 001) from November 1992 for the cancelled Sugar/Boo Radleys gig that was to be held at The Colorado College in Colorado Springs, Colorado. I ran the college's live music committee, I booked Sugar who were bringing along the Boos as support (they were both on Creation in the UK), and then the Colorado voters passed a hateful anti-gay-rights constitutional amendment that forced Bob Mould to cancel all Sugar gigs in the state. So the interview for the college paper I conducted with singer Sice that fall, which was never published due to the gig cancellation, remains unpublished. It was on micro-cassette and I no longer have the cassette, or a micro-cassette player even if I did have the tape, so his musings are forever lost to history. A damn shame because it was a great interview!

Regardless, I never got to see the Boos live so I hope they were as good as the record is!

one file! grab it here!
Analog Loyalist at 9:21 PM
Share