I've probably said it here before, but if not, let me put it out there for once and for all:

My all-time favorite R.E.M. record is 1985's Fables Of The Reconstruction.

Oh, it battled over the years with 1984's Reckoning, 1986's Lifes Rich Pageant, and in more modern times, 1992's Automatic For The People. But unlike those records, something about Fables always drew me back in. Whether it was the oppressively gauzy production, the absolutely beautiful songwriting, the ribbons of melody streaming off the record, it was always there for me. It's a very dark, gloomy record, and it's a stunningly beautiful record. Southern Gothic, yes. 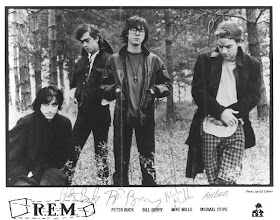 As the band has done over the past two years with 1983's Murmur and the followup Reckoning, the 25th anniversary of this record's release comes this year and with it a deluxe remaster/repackaging of the record. Murmur and Reckoning saw their CD2's filled with live sets, and while there were plenty of good contemporary gig candidates for Fables, the band instead dug deep into the vaults for the recording session arranged in Athens, Georgia just prior to jetting off to London to record with Joe Boyd.

It's been said by the band that Fables was rather underwritten (which I disagree). These demos put lie to this myth - R.E.M. went to London with perhaps their strongest collection of songs to date, needing only minute changes in the studio from what they demoed in Athens, GA prior to leaving.

So while these aren't ripped directly from the record (which isn't released for another week), they are captured from the kcrw.com streaming audio and sound far better than what one would expect from such a thing.

Unlike the final release of these tracks (henceforth called the Athens Demos, as the band has entitled them), this blog's version has them in actual Fables order, with the non-album songs tacked onto the end.

I'll leave it to the listener to decide their favorites, but I will point out a few things that immediately struck me at first listen:

FEELING GRAVITYS PULL
I think if you listen really, REALLY carefully to the final album recording, you can hear hints of Bill Berry's manic drum pattern deep in the murk.

MAPS AND LEGENDS
This demo recording puts the emphasis more on melody than the final recording, which emphasizes mood.

DRIVER 8
If Murmur/Reckoning producers Mitch Easter and Don Dixon produced the third R.E.M. LP, this is what it would sound like.

LIFE AND HOW TO LIVE IT
The final recording doesn't stray too far from this blueprint, and you still can't completely decipher Michael Stipe.

OLD MAN KENSEY
Nearly interchangeable with the final recording, which makes sense as it had been played live for nearly 8 months before this (along with "Driver 8") and the band had a pretty good handle on where it was going.

CANT GET THERE FROM HERE
Missing the horns that featured on the final recording, still a good blueprint for the album track.

KOHOUTEK
Perhaps my favorite track of all time on the actual Fables LP, here it sounds strangely denuded. The one case where I prefer the final recording to the demo. I think because Joe Boyd and the band had such terrible times mixing the record, things were tried on this album track that made it work (on the actual record, "Kohoutek"'s drum sound is completely dissimilar to any other song on the record, and is better for it).

GOOD ADVICES
A beautiful track either way you shake it, again more of a melodic emphasis here than the moodiness of the final recording. The complete lyric gives lie to the myth that the overall lyrical tone of the final LP, and this song in particular, was influenced by the terrible time the band was having away from home in a miserable London winter (since this recording predates that London trip). Lovely Mike Mills vocal countermelodies that are VERY prominent at 2:38 onwards, missing from the final recording.

WENDELL GEE
One of my favorite tracks ever, this out-beautifuls the final recording (if that's even possible). I suppose they've always been there, but Stipe/Mills/Berry create some absolutely stunning vocal harmonies, and Peter Buck's subdued guitar really keeps the mood throughout the track. Stipe's whistling starting at 1:40 doesn't detract at all, in fact I wish he did this on the final recording!

HYENA
Not quite as manic as the 1986 recording with Don Gehman as featured on Lifes Rich Pageant, the extra gestation time gave the band more opportunity to tighten up the track. A better fit on Pageant than would have been on Fables.

THROW THOSE TROLLS AWAY (aka WHEN I WAS YOUNG)
Finally we hear a studio version of the track listed on the inner sleeve tracklisting on Fables, but dropped from the lineup at the last minute and never before heard except at a couple early 1985 gigs (and poorly-bootlegged thereafter). I can see why it was dropped, it's frankly not very good. The lyric was famously recycled and rewritten as the infinitely superior "I Believe" for 1986's Lifes Rich Pageant.