It's not very often I post about a band or record I know very little about.  Usually when in my trawls through unheard (by me) music, I come across something that piques my interest, I put it on my iPhone for future in-depth listening.  Sometimes it turns out not my cup of tea, and sometimes I just can't turn away despite my best attempts.  Very rarely am I driven to post about something I have only the barest familiarity with.

Rex was a band from Brooklyn that was active in the mid-90s.  I was not in a musical state at that time to really appreciate this band (or so I tell myself), but it could also be that I'd simply not been given exposure to their records.

So in my trawls through the darker side of the Internets I ran across two of their records.  Now, having heard of this alleged slowcore (I hate that term) act in passing, and liked the record they made with Califone as a combo called Loftus, I figured I'd give them a listen in their own right.

This is plain and simple beautiful music.  I suppose the slowcore label fits (after all, drummer Doug Scharin was in Codeine for a couple years), but it's more than that.  There is beautiful guitar, skillfully mixed with beautiful string playing.  Some might call this boring but given half a chance - these two records C and 3 are all I've listened to for the past three days - the pure beauty and melancholy seeps from every musical pore.  It certainly doesn't hurt that the records were impeccably recorded by Chicago producer Brian Deck. 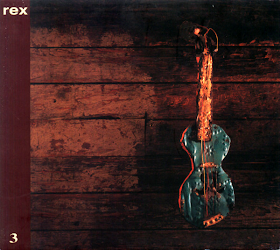 So here is 3, their third and final record.  Less rocky than the previous album C, it's perhaps the band's essence of beauty in one encompassing package.  If I had found this in 1997, when it came out, I don't think I would have appreciated it nearly as much.  "Balloon" finds me hitting the repeat button over and over; other tracks reek (in a good way) of Red Red Meat and other Tim Rutili/Califone sounds.  Chicago guitar dude Bundy K. Brown plays on a track or two (he known primarily for Tortoise and the other John McEntire scene bands) too.