Ask me what my favorite live era is for R.E.M. and depending on the day (and my mood) it'll vacillate between their 1984 (Little America) and 1985 (Reconstruction) tours.  On the one hand, in 1984 they are, at the base, still the garage band of their pre-I.R.S. days playing garage punk folk.  On the other, in 1985 what they lose of that garage sense is made up for by increased mysticism and atmosphere.

I'm not sure if Peter Buck changed his rig between tours, but the 1984 sets feature that signature jangle crunch, perhaps at its finest, while 1985 saw Buck's tone gain a fair bit of range (it sounds like he discovered chorus pedals, that is).  The difference is there, though - any of the band's pre-Fables material, when played on the Reconstruction tour, does sound markedly different in terms of guitar sonics.

So depending on my mood and mental place I'll either reach for an '84 soundboard, or one of the many '85 gigs. 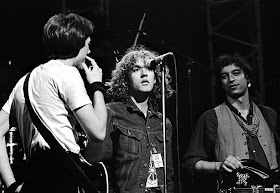 Of late I've been studiously evaluating my catalog of '84 soundboard recordings.  I guess one would place, from a pure sonic perspective, the July 7, 1984 Aragon Ballroom, Chicago (Brawlroom as we lovingly/hatingly referred to it, my relationship with that venue tends more to the hate side than love, but that's a story for another day) - as released on the Reckoning Deluxe Edition - at the top of the heap, with the others ranked against it as the baseline.

While there are rarer sets than today's feature, or more interesting from a setlist or performance perspective, there are - in my humble opinion - no greater-sounding sets than the band's one-off (for MTV) gig June 9, 1984 at the Capital Theatre, Passaic, New Jersey.

This set was a one-off arranged for MTV, for their "Rock Influences: Folk Rock" episode.  As such, and the band still relatively tight from having recently come off an European tour, the band wasn't as sloppily loose as sets from this era could be.  It's obvious that the band is intent on delivering a knockout punch, both for the TV audience and for the assorted celebs/heroes that were in attendance, because the last three songs (not included here, as they were not broadcast/on the master reels) featured various Byrds and others guesting.  It's a wonderfully tight, smooth, well-executed gig by an amazing rock band.

So as not to be completely professional, the band chose this spotlight to debut not one, but three new tracks: "Hyena", "Old Man Kensey" and "Driver 8".  Except "Hyena" which is - moreso than the others - clearly a work-in-progress, the new tracks sound as if they could have been in the set for years.

I'm not sure the provenance of the tape/source used for this post, as I've had it in my collection on CD-R for years, but it's certainly not a recording of the TV broadcast, and not an after-the-fact radio rebroadcast either.  I would bet a hundred Bucks (Peter) that this is copied from the actual master or a first-generation dub of it.  There's no hallmarks of FM or TV lineage, it's got full frequency range up to 22.5 kHz (FM cuts off at ~17kHz, and TV even lower), and it doesn't have that classic FM compression feel to it.  It also is thankfully lacking in that high-frequency "smearing" (usually audible in the cymbals) characteristic of FM broadcast.  Nearly all the other circulating soundboard sets of '84 R.E.M. are ultimately broadcast-sourced, or Nth-generation tape dubs of pre-broadcast radio show LPs (such as the Seattle "The Source" gig), and come nowhere close to sounding as good as this.

How does this Passaic set compare to the Chicago set used on the Reckoning Deluxe Edition?  I think it's of a piece with it - while I disagree with the mastering on the Chicago set, I have no quibbles with the performance or overall sound.  I would just rather listen to this gig than the Chicago set.

I spent a fair bit of time touching up this Passaic set to the point that the band could lift this set from this blog and release it tomorrow, and nobody would know it was mastered by some dork in his bedroom office.  It's *that* good.  You can put that (put that put that) on your wall.

I don't care if you've grabbed this gig in the past from any other place on the Intarwebs, this version here is the definitive version.  I place my reputation on it.

* - live debut.
** - not broadcast, and not included here. (I've never seen these on any soundboard set from this gig; it appears only an audience recording captured them.)

FLACs to put on your wall, here.

What are your favorite - both in terms of performance, setlist and sound quality - REM soundboard sets from this era?  Anybody sitting on an unreleased soundboard from either Pageantry or the Work Tour?  Please share!
Analog Loyalist at 4:53 PM
Share