The reaction to last week's post frankly surprised me.  I knew we had some good songs, but the recording quality was shite and my "mastering" job was really quick-and-dirty.  Frankly, they were done in a basement with two mics feeding into a 4-track at standard cassette speed.  Not at all professional.  But I guess, in a sense, it was perfect for our music.  I think we all would have loved to put some of those down in a real studio, multitrack style, because as I said in more than a couple cases the songs were there.  But it's what it is, and if people dug it, that's really cool.

Which brings me to the next one.  Several months after these were done, I was planning to meet up with a college friend in Chicago who was in town from California, visiting a mutual friend from Colorado (I attended university in Colorado).  Turns out the apartment I met my friend at was two houses down from my best friend's flat, which, in a city the size of Chicago, is pretty impressive.  What was also coincidental was that the mutual friend had become a pretty damn good guitarist and, after the "hey man, it's been years!" pleasantries (and more than a couple beers) had been exchanged, a band of sorts was formed.  So for that fall of 1997, and spring of 1998, I'd saunter back and forth from my best mate's flat to the band flat, playing, rehearsing, writing, drinking.  One fall afternoon, I remember sitting on the deck at the best mate's flat, smuggled Fat Tire Amber Ale sat on the floor beside me, and guitar in hand after spending some time listening to Wire's Pink Flag record.  A few strums later, I had a song.  Knowing I was meeting up in a couple hours with the band for practice, I hurriedly grabbed a sheet of paper and wrote some half-assed lyrics.  That evening, we had the full song.

Another time I was in full-on Bob Mould mode at my house and was endlessly playing my 12-string, throwing off a lot of Mould-ish chordings and guitar figures, and suddenly had the framework for another song.  I quickly laid down the basic guitar track on my cheap 4-track, and came up with a pretty cool bass part using the lower strings on the guitar.  The lyrics didn't come as easily as the music, but eventually I had those too (and somewhere still have the original handwritten lyrics, with all the scratched-off changes and crap, on the back of an envelope).  It turned out to be the first original our nascent band did, and remains (IMHO) the best written song we had.

Then there was the song built around a stolen Yo La Tengo guitar riff (the main riff from "I Heard You Looking", namely), that after some struggles with the musical bed, quickly became another song with tossed-off lyrics.  I wrote the lyrics because it needed words, basically...

This band was called Helium Derby. 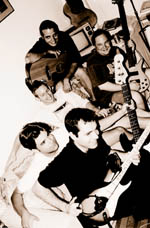 Eventually, we had quite a few songs written and in good enough shape to record an album.  We had only played a few parties, no real gigs, but figured why the hell not do a record?  One of the guys knew another guy who recorded bands, so we hooked up with him and recorded the album in his Lake View apartment.  The engineer had, which at the time seemed really fucking cool, a hard disk recording setup and other bits of gear which you'd expect someone like him to have.  This was 1998 so the concept of hard disk recording, in an apartment on the North Side of Chicago, seemed really major league to us.  While no ProTools, or 2-inch analog tape, it was better than the 4-track we had.  So we tracked the record; drums in the practice space (the drummer's basement, namely), everything else in the apartment studio.  Some songs took fucking ages to get right (I remember one song taking a month to do the guitars, only because the recording sessions were short, and I was constantly fighting the engineer as to how I wanted my guitars to sound), while others were done in an hour.

My favorite moment of these sessions was watching the Cardinals' Mark McGwire break the single-season home run record, live, against the Cubs with Steve Trachsel pitching (this was in the thick of the Sammy Sosa / Mark McGwire home run record chase).  And I fucking hate the Cardinals.  We stopped whatever song/instrument we were tracking, watched the festivities, and resumed what we were doing.

We ended up with 10 songs, no mastering, and eventually a few hundred CDs.  Our plans were to play shows, sell the CDs, do more band stuff, but things petered out with one of the guys moving to Minneapolis for graduate school.  But it was fun, and an experience I'll never forget, not having done it since.

So here we are, with these 10 songs finally unleashed to an unsuspecting public.  Somehow I doubt the industry will be beating a path to our doors... 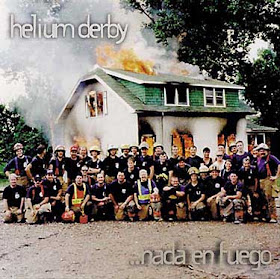 01 All Along
(music and lyrics: Analog Loyalist)

This is the song written by yours truly in Bob Mould mold. I play all the electrics, including the "solo", and Isaac pretty faithfully plays the bass line I wrote.  It sounds great both in this loud, driving interpretation as well as on a 12-string (as it was written on an acoustic, rooted on the very Mould-ish G5/Em/C5 chord pattern).  My one gripe with this song is that we never could nail the mix; I remember umpteen mix candidates all rejected for various issues, and I think we ended up with the final mix just by default.  It really could do with a remix, but alas... In this mastering, I tried my damnedest to smooth out some of the really horrible EQ and muddiness the final had, and it's a lot better, but not ideal.

This was built from the bottom up in practice; I had been listening to a lot of Massive Attack in that timeframe and wanted to see if we could do something a bit more rhythmic.  We failed, completely, at coming anywhere close to Massive Attack, but out of the debris came this pretty cool song.  I get to express my inner Hooky on bass, much more successfully than "This Curse" from my previous band.

I don't remember why we didn't actually track this in true multitrack fashion; we recorded the music completely live as an ensemble (with little mic separation, meaning we couldn't redo any parts without redoing the entire performance), with Eric laying down his vocals at a later time.  It was quite stressful for me on bass as it fell on me to keep tempo pretty solid throughout, but I think we pulled it off.

04 Nothing More Than This
(music: Ian; lyrics: Eric)

I don't remember much about the genesis of this song at all, but that I really dug the basslines I wrote for it, and just overall liked the feel and poppiness of the song.  I just sort of recall it falling out of the sky from Ian's 12-string, and suddenly we had a song.  I think he and Eric had worked it up before he presented it to the rest of us?

This is the Wire-influenced song I wrote on the back deck of my mate's apartment.  It's two chords, throughout, with only picking/strum patterns separating the components.  This is all me on electrics, including the descending harmonics.  Thanks Jay for the "2 B Real" lyric snippet!

Sometimes I think Ian's goal was to see how many lyrics he could fit in a 2:48 song, hehe.  We get a bit rootsy here, which I had no problem with at all.  Another song that just sort of emerged fully formed, though I think Ian had it all complete anyway and just showed it to us once or twice before we had it down.  I totally nicked U2's "With Or Without You" for the bass.  Sue me.  My favorite part is the stray snare in the bridge; it was an error, but it's perfect.  Perfectly placed and great.

This is the Yo La Tengo song.  Well, a guitar riff is, at least.  One night in practice I started jamming on "I Heard You Looking" with another similar riff against it, and eventually we had a song all ginned up.  It didn't come across on tape as good as it did when played live, but we could only do so much with the time we had.  Lyric idea from Isaac's off-the-cuff vocal when we first were jamming it; he said he was singing something about being cold so I ran with that idea and quickly had a lyric.

Isaac was into 16 Horsepower and came in with this thing pretty much fully formed.  I just wrote up a bassline, and Sean the drums, and we had the song.  Isaac and Todd went gonzo with the guitar FX in the box.  If you listen carefully, you'll hear the drunken Arkansas hillbilly behind Eric's vocal track.

I came up with this terrific idea for a song on bass, and from the very beginning always knew I wanted it to be an album closer (it just always had that closing feel to it).  In fact its working title was "Closing", from the very beginning.  I just couldn't come up with a decent chorus to save my life, which thankfully Ian stepped in and wrote.  The song is just a plain favorite of mine, in its entirety, and it's a beautiful one.

Get yer MP3s here.  Again, FLAC is available for the bravest of souls, just ask.