I saw New Order last night in Toronto, my third time seeing them (1993 Chicago, and 2005 Chicago, being the other two).

I had aftershow passes to meet the band.

It was, in a word, awesome.  Both the gig - by far, the best of the gigs I've seen them play - and the aftershow.

I didn't record the gig, but did record video of Ceremony and Elegia which once I figure out how to rotate 180 degrees (for some reason my Win 7 PC plays these iPhone 5 1080p videos upside down) I will upload.

Hooky was not missed at all; Tom Chapman was fantastic in his pseudo-Hooky role and added his own contributions to each song which just plain worked.  The band is clearly in a happy place with their current lineup/outlook, both visually and in discussion, and while I still think the songwriting of more recent times doesn't quite match that of the 80s output, perhaps the reaffirmed bond and outlook of the band/management/personnel will lead to great things again.  Bernard said they will be doing a lot of writing and recording next year... And we can't at all discount the returned Gillian influence on the songwriting.

I didn't discuss the blog or Recycle, or the Archives project, with them because it was not the appropriate setting.

Steve is the most awesome guy ever, he knew straightaway who I was and was obviously just as happy to talk to me as I was to him (clearly he knew, based on the fact that he told me so, what I'd done for the band since 2006).  And a hell of a drummer; seeing him playing acoustic drums (rather than the electronic drumset he'd been using since 1987) - and hearing the audible difference in each song - was absolutely spectacular.

It was quite something getting deeply involved in technoweenie audio engineering discussions with someone who cares, and knows what I'm talking about, with Steve.  I got a lot of questions answered that aren't really relevant to share here, and some essential background on other things that aren't really ideal to discuss in this format.  One thing that is of interest is that our Western Works reel isn't the master per se, but a dub of it (all the Cabs members and NO had reel dubs off the master, and this was likely one of those), and the Rob Gretton vocal track ("Are You Ready...") was unfinished.  He thought how we obtained the reel was awesome.

Here's your humble blogger and Bernard (who was jealous of my iPhone 5; he said his iPhone 4 was getting a bit too slow, haha)... 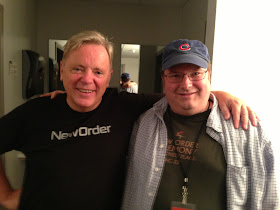 I am tired, it was a long night and drive back from Toronto but absolutely worth it.  Cheers!
Analog Loyalist at 1:22 PM
Share